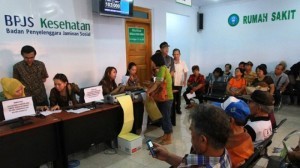 With consideration under the Law on the State Budget (APBN), the distribution of Transfer to Regions and Village Funds may be delayed and/or withholding in the event the region is in arrears on the payment of premiums required in the provisions of the laws and regulations, on 4 December 2017, the Minister of Finance Sri Mulyani Indrawati has signed a Regulation of the Minister of Finance No. 183/PMK.07/2017 on the Procedures for the Settlement of Arrears on Local Government Health Insurance Premiums through the Withholding of General Allocation Fund (DAU) and/or Revenue-Sharing Funds (DBH).

Under this Regulation, the deduction of DAU and/or DBH shall be imposed on the Regional Government in arrears (Provinces, Regencies/Cities), which have exceeded the period of 1 (one) year, which the Social Security Provider Body (BPJS) for Health has made an optimal billing effort. “The deduction of DAU and/or DBH is calculated as the settlement of Arrears,” reads Article 2 paragraph (3) of this Regulation.

Prior to such deductions, based on the Regulation, the BPJS for Health will reconcile with the Regional Government to determine the amount of Arrears based on the evidence held by each party.

Furthermore, based on the results of the audit as intended, the President Director of BPJS Health or the appointed official, stipulates the amount of Arrears of each Local Government. In addition, based on the determination of the amount of Arrears as intended, the President Director of the BPJS for Health or the appointed official shall submit the letter of request for withholding of DAU and/or DBH as settlement of Arrears to the Director General of Fiscal Balance.

Based on the letter of request referred to, under this Regulation, the Directorate General of Fiscal Balance shall calculate the quantity and stages of deduction of DAU/or DBH, conducted by considering the amount of demand for cutting, the amount of disbursement, other cutting and/or deferral sanctions, and the relevant Fiscal Capacity of the Region.

The funds derived from DAU and/or DBH deductions for the settlement of arrears, based on this Regulation, are accounted for using the Non-Bid Reception account code, which is a component of receipt of Third Party Funds as part of Regional Government Contributions.

“This Ministerial Regulation shall apply from the date of its promulgation,” read Article 10 of Regulation of the Minister of Finance Number: 183/PMK.07/2017, which was established by the Director General of Legislations of the Ministry of Law and Human Rights, Widodo Ekatjahjana on 4 December 2017. (The Center of National Legal Documentation and Information Network of the Ministry of Finance/ES) (MUR/YM/Naster).