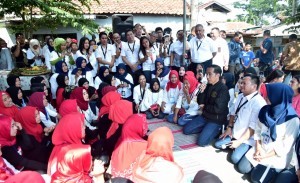 The Indonesian Government continues to improve the welfare of the people, especially the underprivileged families.

One of them is through Fostering Economy for Prosperous Families (known as Mekaar) program, a financing and business development program conducted by a state-owned financing company Permodalan Madani Nasional (PMN).

This Mekaar program has been started since the end of 2015 and it currently has 3.9 million customers throughout Indonesia, President Joko Jokowi Widodo said while meeting the PNM Mekaar customers in Bantarjati Sub-district, Bogor City, West Java Province, on Sunday (2/12).

On the occasion, more than 150 PNM Mekaar customers who have received financing for more than a year got an opportunity to interact with the President and shared their businessesprogress.

President Jokowi appreciated these customers, mostly women, for being disciplined, trusted and honest in managing their finances.

The Mekaar program itself is targeted to help micro and small business groups by providing group-based financing services. Besides financing, the customers also receive guidance in developing their businesses during weekly meetings.

Through the program, the customers can obtain unsecured loan from Rp 2 million to Rp 5 million, which given gradually. Regarding this, President Jokowi expressed hope that the amount can be increased in the future.

The Government needs to provide more capital into the PNM so that the company can increase their funding to the customers, he added.

According to the President, this kind of program is very important to help micro and small businesses to grow independently. On a wider scale, this program can play a pivotal role in reducing inequality among the people, he added.

I ordered Minister of State-Owned Enterprises (BUMN) and Director of PNM to develop a similar program throughout the country, the President continued.

For the record, until today PNM Mekaar has 1,770 branch offices and its customers have reached 3.938 million people in 4,006 sub-districts, 252 districts / cities and 30 provinces.

Meanwhile in Bogor alone, PNM Mekaar has served as many as 136,623 customers consisting of 8,330 groups.

Mekaars National Non-Performance Loan (NPL) is at 0.25 percent, which shows that the customers have high commitment to repay their loans. (BPMI/EN)