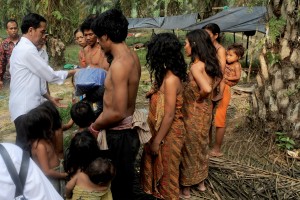 President Joko Jokowi Widodo said that several efforts have been taken by the Government to tackle the problem of forest and land fires in several provinces. However, the fire extinguishing effort is not as easy as imagined because the area that is burned is quite vast.

The fire mostly occurs in peat land, and it is not as easy as we think, because the peat land covers 1.7 million hectares. This is not a forest fire but peat land fire which is 5 meters deep, President Jokowi said to the reporters after observing the haze-free learning space, located in SDN 181/IV elementary school, Lebak Bandung, Jelutung Sub-District, Jambi, on Friday (30/10).

(We) were assisted by several countries. However, when they knew that they will extinguish fire in peat land, they were surprised, the President said during his visit to Jambi (30/10).

The President thought that one efective measure that being the priority to extinguish forest and land fires, as well as to clean the haze, is by making artificial rain using weather modification technology in order to make the rain falls faster.

There were no clouds before, then we showered it with salt as much as we can, eventhough it was hard. However, there are much clouds in the sky now, and we keep showering the clouds with salt. Cassa and Hercules are used to spread salt in the air, President Jokowi said.

As previously reported, President Joko Widodo and First Lady Ibu Iriana Widodo arrived in Jambi since Friday (30/10), after observing the management of forest and land fires in Palembang, South Sumatra.

When staying in Jambi, President Jokowi visited SDN 181 elementary school in Jambi City, a model free-haze school which is initiated by the Minister of Education. Furthermore, President Jokowi also visited nomadic tribe known as Orang Rimba, in Bukit Duabelas National Park (TNBD), Sarolangun Regency who went outside the forest due to the haze.

Accompanying the President in the visit were Coordinating Minister for Human Development and Culture Puan Maharani, Minister of Culture and Education Anies Baswedan, Minister of Health Nila F. Moeloek, Minister of Public Works and Public Housing Basuki Hadimuljono, and Minister of the Environment and Forestry Siti Nurbaya. (*ES) (RAS/MMB/YM/Naster)