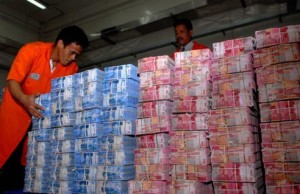 Depreciation of this currency is a global phenomenon as the impact of The Feds decision to reduce global liquidity through reduction until receives monetary stimulus cessation program or Quantitative Easing (QE) III, said Firmanzah on Monday, Jakarta (22/9).

In addition, Firmanzah explained besides domestic aspects, two influences which collide is surely would create uncertainty in financial market both in short and medium term on rupiah exchange value.

These two influences are Feds decision that continues the QE-III and ECB together with Japanese Central Bank and Chinese Central Bank that increase liquidity to stimulate economy in their region.

These are the main factors that cause depreciation on currency exchange value in majority emerging-markets, said Firmanzah who also added that almost all currencies in Asia are having depreciation during trade session in 3rd week of September.

On the other hand, Firmanzah added that economy in other big countries such as Europe, China and Japan are having liquidity problems that encourage in taking QE policy. ECB launches Targeted Long Term Refinancing Operations (TLTROs) by providing easy loans to banking industry in Europe which worth 400 billions euro (518 billions US dollar).

Central Bank of China launches stimulus worth 81 billions US dollar to 5 largest state-owned banks to boost economy in China. While Central Bank of Japan keeps their stimulus to prevent more depth influence of deflationary. this circumtances could also explain the economic prospects in these regions still need time to achieve targets in recovering the economy to the expected level, said Firmanzah.

Hence, according to the Professor of Economics in University of Indonesia, it is not surprising if almost all currencies in Asia have were depreciated againts US dollar in third week of Semptember of 2014. Countries that having weak exchange rate of their currency are Malaysia, South Korea, Philippines, Japan, Thailand, Singapore, Taiwan and Indonesia.

Firmazah who is also a Special Staff of the President for economy and Development, reminded relevant officials in Indonesia to really anticipate the termination of QE-III in US, and economic contraction in European zone, China and Japan that still going on.

This uncertainty and volatility of global financial market would still going on, in short and medium term. We known the impact of external influence which surely would still be continue to happen, said Firmanzah.

According to Firmanzah, the principle of prudence and vigilance in the management of monetary sector, fiscal and real sector to mitigate external influence in uncertainty, needs to be maintained and improved. He reminded, creating the right formula and dynamic-equilibrium is required amid exchange rate, interest, inflation, national reserves, and real sector indicators.

Firmanzah believed that through coordination among the Bank of Indonesia, government, Deposit Insurance Agency (LPS) and Financial Service Authority (OJK), we could maintain and improve resiliency and competitiveness of our economy, in short and medium term. (ES)(Ifp)