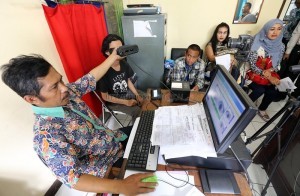 In an effort to avoid the possibility of losing the rights of the people to vote, Indonesian Ministry of Home Affairs has urged residents who do not yet have Electronic Identity Card (E-KTP) – including those who will turn 17 when simultaneous regional elections are held –  to immediately have their personal data recorded.

Minister of Home Affairs Tjahjo Kumolo has issued a Minister Regulation on the acceleration of processing population data services. The service should be completed within one hour, the Ministrys Head of Information Center Department Arief M Eddie said in Jakarta, Monday (16/4).

Arief added that related to the readiness of facilities and infrastructures to support the service, the Ministrys Directorate General of Population and Civil Registration Agency has checked all equipment and coordinated with state-owned electricity company PLN to prevent power outage in the offices.

Additionally, to speed up the process Minister of Home Affairs has also instructed (the staffs) to provide holiday service.  However, the Minister urged the public to also actively report for any data changes.

The point is, for first-time voters who will have the right to vote in 2018 regional elections, they can now start having their data recorded  for E-KTP, said Arief, adding that after recording data, Directorate General of Population and Civil Registration Agency will give a certificate to be taken to TPS (Place of Voting).

The certificate itself can be issued only if the voters had been recorded their data; thus, for those who do not have it will lose their right to vote, Arief said.