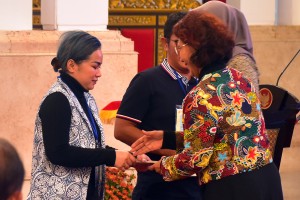 Minister of Marine Affairs and Fisheries Susi Pudjiastuti said that for the last four years, Indonesian fishery products have been accepted in 147 countries, increased from 111 countries previously.

It shows that the quality of Indonesian fishery products have improved thus can be accepted in more countries, Susi said at a meeting between President Joko Jokowi Widodo and fisheries entrepreneurs who received Fisheries Business Permits (SIUP) and Fishing Permits (SIPI), at the State Palace, Jakarta, Wednesday (30/1).

The Government, Susi continued, encourages national fisheries entrepreneurs to dominate fishery sector in their own country. Foreign investment on capture fishery has been also closed for foreign investment and monitoring on our oceans has been enhanced so that foreign vessels can no longer steal fishes within Indonesian territory.

Concerning Indonesian vessels, the Minister added, based on evaluation from the last 2 years (2017 and 2018), unfortunately some violations still occurred although the Government has implemented a good policy.

She cited an example, in 2015, the Government granted a mark down amnesty without imposing criminal charges. Moreover, fisheries entrepreneurs whose vessels are under 10 Gross Tonnage (GT) no longer need to apply for permits.

No sailing permits needed for vessels capacity under 10 GT. Meanwhile, for vessels of 30 GT and over, the Government is now preparing to implement legal, reported and regulated fishing, Susi explained.

In the meantime, Susi reported that out of 3,558 vessel permit holders whose ships had been reviewed, 1,203 of them need to update their data.

After updating their data, the report showed that during 2017-2018 the fisheries production increased by 600,183 ton. So, the problem is at the data, Susi said.

Therefore, she suggested the fisheries entrepreneurs to provide the accurate data to the Government so that the public can see the Governments hard work for fisheries industry.