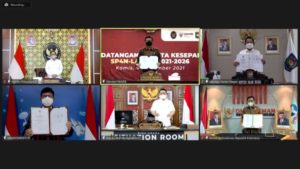 The Government continues to improve the performance of the National Public Service Complaints and Management System – the People’s Online Aspiration and Complaint Service or SP4N-LAPOR!.

The system previously managed by Ministry of State Apparatus Empowerment and Bureaucratic Reforms (PANRB), the Presidential Staff Office (KSP), and the Indonesian Ombudsman. However, through the signing of Memorandum of Understanding of SP4N-LAPOR! of 2021-2026, the portal will be strengthened by adding two agencies, namely Ministry of Home Affairs and Ministry of Communication and Informatics.

The signing of the MoU, which took place virtually on Thursday (9/9), was carried out by Minister of PANRB Tjahjo Kumolo, Minister of Home Affairs Tito Karnavian, Minister of Communication and Informatics Johnny G. Plate, Presidential Chief of Staff Moeldoko, and Chairman of the Indonesian Ombudsman Mokhamad Najih. The signing ceremony was witnessed by Coordinating Minister for Political, Legal and Security Affairs Mahfud MD.

Mahfud MD in his remarks expressed hope that the cooperation of these five agencies could further build integration in the management of public service complaints from the regions to the central level.

“So that complaint management can run effectively, efficiently, and provide ease of use,” added Mahfud.

He also expressed belief that the signing of the MoU will further strengthen the involvement of ministries, institutions and regional governments. In addition, the active involvement of the public in submitting complaints can spur government agencies to make complaint handling more effective and provide certainty of settlement.

Similarly, Minister of PANRB Tjahjo Kumolo also welcomed the signing of the MoU. According to him, this collaboration is in line with the core values of state apparatus. Complaint management has an important meaning in fulfilling the public’s right to quality public services and in accordance with service standards.

The signing of this MoU is also in line with President Joko “Jokowi” Widodo’s directive to provide public services that emphasize speed, innovation, and results-oriented. Tjahjo emphasized that his party will oversee the vision of improving public services through complaint management.

“Specifically in our role as public service builder, we will oversee the issues in the formulation of the SP4N-LAPOR! policy direction by taking into account input from all other managing partners,” he said, adding that the SP4N-LAPOR! is the main door and a reflection of the quality of government services to the public.

On that occasion, Minister of Home Affairs Tito Karnavian said that he will continue to coordinate and communicate intensively with the regional governments to support the management of SP4N-LAPOR!.

“Efforts to encourage improvement in the management of complaints by regional governments will continue to be carried out by Ministry of Home Affairs,” said Tito.

“My Ministry has provided technical support for the development of SP4N-LAPOR! since 2020 and we will continue this support,” said Johnny.

In the meantime, Presidential Chief of Staff Moeldoko emphasized that the Government needs to continue evaluating the effectiveness of this portal.

“My office will always coordinate, monitor, and evaluate the follow-up on complaints on national priority programs and strategic issues,” said Moeldoko.

On that occasion, Chairman of the Indonesian Ombudsman Mokhamad Najih stated that his party remains committed to playing an active role in efforts to develop SP4N-LAPOR!. (PR of Ministry of PANRB/UN) (EST/MMB)