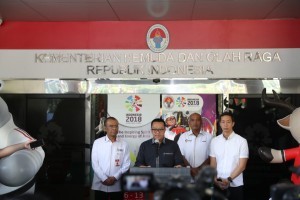 After received reports from various parties including the Indonesian Professional Sports Body (BOPI), the Government has decided to suspend Indonesian League for two weeks, Minister Imam Nahrawi said in a press statement at the Ministrys office, Jakarta, Tuesday (25/9).

The suspension is conducted to respect the victim and his family as well as to offer national mourning. This incident must become a momentum to introspect that we must not trade lives for football, the Minister said.

During the period of suspension, Imam Nahrawi instructed the Indonesian Football Association (PSSI) and the operator (Liga 1) to take extraordinary measures given the incident considered a special case that requires extraordinary, firm, bold efforts in upholding regulations and imposing both administrative and criminal saction.

The Government urged the PSSI to educate (supporters) and comply with the prevailing regulations made by FIFA, Asian Football Confederation (AFC), or the PSSI. Good relationship between supporters and football clubs must be established in comprehensive, mutual, and professional manners, the Minister added.

The Minister also reminded people that amidst the tragedy, Indonesia national football team, be it U-16, U-19, and senior teams are still competing.

Therefore, the Minister reminded people that we must not let national solidarity that was strengthened by U-16 and U-19 teams torn apart because the incident in Liga 1. The Government, Imam added, will continue to monitor Liga 1 to make sure something like this never happens again.

As previously reported, Minister of Youth and Sports Imam Nahrawi conveyed his deep condolences to the family of victim, Haringga Sirila, who died at the hands of a group of supporters at the GBLA Stadium.

May Allah forgive his sins, accept his good deeds. May Allah also gives his family the strength to bear the great pain, and to embrace the death of Sirila, the Minister said.

According to the Minister, the incident that took Haringga Sirillas life is a heinous, inhumane act that cannot be accepted for whatever reason.

This is no longer a tragedy on football or sports, but a humanitarian tragedy for this country. What is more surprising is that the suspects are a young man under 20, Imam added.

The Minister firmly said that football and other sports should serve as a medium to unite the country, to entertain people, and to make achievements, rather than a battle area.

Do not turn it into a mass grave as many lives were lost in vain, the Minister firmly said.