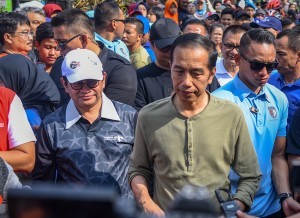 Prices of staple foods in Indonesia are still stable and in a normal and reasonable position, President Joko Jokowi Widodo has said.

The prices are all the same everywhere. For example, the price for a bunch of water spinach and cassava leaves are Rp2,000, including in Bogor and Banten, President Jokowi told reporters in the Car Free Day event in Dago, Bandung, Sunday (11/11).

Chili price is in stable position at Rp40,000. The prices once skyrocketed to Rp80,000. Indeed, we cannot control the price to reach Rp10,000 for the sake of our farmers, the President added.

President Jokowi went on to say that the Government wants to maintain balance of prices in a normal and reasonable position for the interest of farmers as producers and the people as consumers since the prices do not fluctuate, President Jokowi said.

On the occasion, the President added that he appreciated efforts made by the city governments to improve cleanliness of traditional markets. They really want to clean the markets from muds and the stench and they also want to tidy up the kiosks, he said.

As of today, according to President Jokowi, there are approximately 2,500 markets built, both in cities and districts and for the village market, the President continued, more than 5,000 small markets have been built.. (FID/AGG/EN)