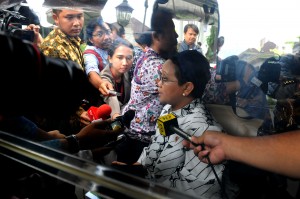 A total of 10 (ten) Indonesian citizens were lightly injured by the earthquake shaking the city of Tainan, Taiwan, on Saturday morning (6/2).

This morning I received information that there were three more citizens who suffered minor injuries. So the total number of Indonesians suffering minor injuries was 10 people, said Minister of Foreign Affairs Retno LP Marsudi to the press after accompanying President Joko Widodo received the Secretary of Russian Security Council at the Merdeka Palace, Jakarta, Wednesday (10/2).

Foreign Minister mentioned that a team from Indonesian Economic and Trade Office in Tainan are still combing the city and making any coordination.

Everyday I get 3 to 4 times updates and keep communicating with our post in Tainan, said the Minister.