Foreign Aid for Handling Haze will be Concentrated in South Sumatra 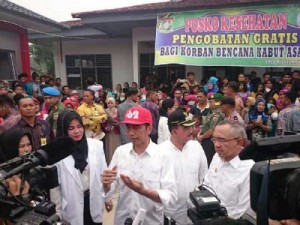 “Assistance in the form of aircraft for extinguishing forest fires that will be concentrated in South Sumatra, because of the results from our cheking that the highest hotspots are in South Sumatra,” President Jokowi said when reviewing the Command Post of Health Services in PHC Kuok, the Village Lereng, District Kuok, Regency Kampar, Riau, Friday (9/10).

The planes, President Jokowi said, will bring water for water bombing with capacity of 12000 – 15000 liters.

Regarding law enforcement related to forest fires, President Jokowi explained that currently still being processed at the police. “In the near future is likely to be announced who is in violation of legally,” he said.

Land fires that frequently occur in the peat lands recently, in which on the top of peat land are not see any fire, but underneath it were still smoldering. “Therefore, indeed the correct is to do with blocking the canal. Bulkhead the channel for peat lands rewetting, but it takes time,” President Jokowi said.

He said that the construction of the canal blocking has begun. “We’ve worked hard to create a bulkhead channel. In Riau, South Sumatra, also in Kalimantan already started all. However, it takes time,” the President said.

Jokowi president and his entourage arrived in Kampar regency, Riau Province, after the journey by road approximately four (4) hours from Bukittinggi city, West Sumatra. The overland journey undertaken to overcome the obstacles weather hindered by smog in most areas of  Riau Province.

The presence of President Jokowi in Puskesmas Kuok to ensure the health services to the people affected by the disaster of smoke well served. After seeing the provision of health services to the community and met with the Head of Puskesmas Puok, President Jokowi who was accompanied by Minister of Health Nila Moeloek said that an increasing number of communities affected by ISPA in Kampar become as many as 18-20 people per day.

“However, after being given treatment, then given oxygen, they had returned to the house, no one stay,” the president said.

The arrival of President Jokowi in Kampar Regency were welcomed by Acting Governor of Riau, Asyadjuliandi Rachmad; Kampar Regent, Jeffery Noer, Forkopimda Riau and Kampar as well as local people who had thronged the location since morning. (TKP/ES)