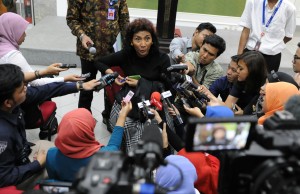 President Joko Widodo (Jokowi) instructed Minister of Maritime Affairs and Fisheries Susi Pudjiastuti to immediately establish Law Taskforce on Fisheries which has been postponed for a long time and it is only waiting for an approval from Coordinating Minister for Maritime Affairs.

The President, Susi said, also agreed with the revocation licence for foreign fisheries industry which is still allowed 100 percent until now.  Later, the licence of fisheries industry will not be given at all. However, we will give license for processing industry; 40 percent in the Western part and 60 percent in the Eastern part of Indonesia, Susi said to the reporters in the area of Presidential Palace, Jakarta, after meeting President Joko Widodo, on Wednesday (16/9) afternoon.

Minister of Maritime Affairs and Fisheries does not close the opportunity to change or increase the composition of fisheries processing area division so that foreign investors are interested in investing in the processing industry.

According to Susi, the President has stated that fisheries industry is not allowed for the foreign investors. It must be Indonesian fishermen.

Related to the salt self-sufficiency program, Minister of Maritime Affairs and Fisheries Susi Pudjiastuti said that firstly we had to improve our own salt quality. Secondly, if we want to have sufficient salt, we have to open additional new land in East Nusa Tenggara (NTT) and Madura.

Yesterday, the Regentof Pamekasan said that there is a land between Pamekasan and Sumenep which could be revitalized for the additional land, Susi noted.

However, Minister Susi stated that the revitalization effort should not bring disadvantage to the farmers. She feelspity if the price of salt is only Rp 200 when harvest time.

Susi admitted that she has received the sample of salt from the people in Pamekasan, Madura, East Java, either the salt with geo-membrane and the salt without geo membrane. We will take it to check the quality, and we compare with the chemical company using imported salt, Susi stated.

Previously, the Minister was furious with the bad behaviour of some importers who imported salt when the production of the local salt was abundant.

When visiting Surabaya recently, Susi saw that there was imported salt, whereas it is still harvest time.

Nowadays, imported salt enters when harvest season comes. Yesterday, I visited Surabaya and saw that there was imported salt, whereas this is still harvest time, Susi said at the Halim Perdanakusuma Airport after a working visit to the salt farmers, Jakarta, on Saturday, (12/9).

When visiting Pamekasan, on last Friday (11/9), Minister of Maritime Affairs and Fisheries Susi Pudjiastuti said that she would conduct laboratoty testsof Madura salt to abroad to know the real quality of salt in that area.

During this time, many people said that the quality of Maduras salt is not good, whereas, after I see directly here (Madura), the quality is very good, Susi said in Pamekasan, on Friday (11/9).

Susi still does not understands why the good quality salt in Pamekasan is still not appropriate for industrial salt. Therefore, she added, her office will take the Madura salt sample of production result of the salt farmer society in Pamekasan to be tested in the laboratory abroad. (ES/Humas) (JS/MMB/YM/Naster)