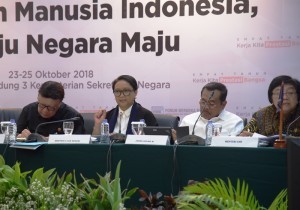 Minister of Foreign Affairs Retno Marsudi said over the last 4 years, 51,088 cases of Indonesian citizens (WNI) working abroad have been successfully completed. In addition to that, the Indonesian migrant workers (TKI) finally receive their unpaid wages amounting to Rp408 billion in total.

Among them, 443 Indonesian citizens have been released from death row; 181,942 Indonesian migrant workers running into problems have been repatriated; 16,432 people have been evacuated from conflict areas and 39 people have been freed from hostages in the southern Philippines, Minister Retno explained at a press conference on 4-Year Report of JokoWidodo-Jusuf Kalla Administration, in Jakarta, Thursday (10/25).

She asserted that the Joko Widodo-Jusuf Kalla administration gives high priority to the protection of Indonesian citizens living abroad, by showing the presence of the country to them.

The strengthening of the protection system, according to the Minister, is performed by creating innovations, such as providing a hotline, a 24-hour service, a safe travel guidance, a smart embassy scheme, a welcoming text message blast; and establishing a Rogatory Online Monitoring (ROM) website and rogatory management information system, as well as an e-protection portal.

The e-protection portal is the basis for one data policy to integrate population administration information, both for citizens in Indonesia and abroad, the Minister stated, adding that this is a huge breakthrough for Indonesia.

According to the Minister, the Government not only sought to protect but also to promote citizen protection at regional and international scope, for example through ASEAN. (MAY / DNS / ES)