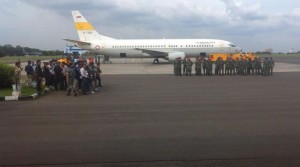 The Government of the Republic of Indonesia on Wednesday (29/4) afternoon sending humanitarian aid and evacuation team to Nepal. Humanity team is also expected to accelerate the evacuation of Indonesian citizens (WNI) who become victims of earthquake which measuring 7.9 on Richter scale (SR) that shook Nepal on Saturday (25/4) afternoon.

Minister of Foreign Affairs Retno Marsudi, when removing the team said, this humanitarian mission is a form of brotherhood and solidarity as well as sympathy for the Indonesian government to Nepal. “Therefore, although coordinated by the Ministry of Foreign Affairs, this assistance involves all components of the nation,” she said.

In the Humanitarian Team also has two (2) doctors from the police to equip 15 doctors and medical personnel that have been prepared by the BNPB.

“The team will deliver the phase 1 of the humanitarian aid in the form of the most urgent basic needs, such as hospital tents, surgery equipment, medical equipment, medicines, refugees tents, as well as fast food,” Krishna said.

According to the data on the Ministry of Foreign Affairs, there are 76 Indonesian citizens in Nepal when the devastating earthquake. As many as 19 of them are citizens who settled in Nepal and 57 citizens who are conducting a visit to Nepal.