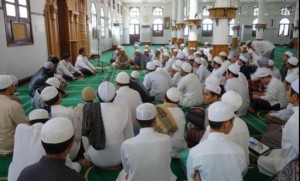 Indonesian students in Yemen when they met the Acceleration Evacuation Team, in Tarim, Yemen, a while ago

Foreign Affairs Minister Retno Marsudi, said that the evacuation of 220 citizens from Yemen conducted in two phases, has been underway quickly, safely and efficiently. Foreign Minister continues to urge Indonesian citizens (WNI) in Yemen to select the evacuation option return to the homeland for the safety of himself and family.

“When the evacuation option can still be done, the government expects all citizen immediately volunteered to be evacuated before it’s too late,” Retno said in a press conference at the Foreign Ministry Palapa Room, Jakarta, Monday (6/4).

Just as known, the GOI has repatriated 110 citizens from Yemen in the first phase on Sunday (5/4), and Monday (6/4) then the government repatriate as many as 110 citizens (WNI) from Yemen to Jizan, Saudi Arabia, before being flown into the home land. The remaining approximately 82 Indonesian citizens (WNI), will be picked up by the Indonesian Air Force in Jizan aircraft to be flown to Salalah in Oman, and subsequently to Indonesia with commercial aircraft.

Until now, there are a number of citizens (WNI) who are in various shelters and wait for  evacuation, with details as follows: 89 people in Aden, Sana’a 40 people, Al-Mukalla 40 people and Tareem 58 people.

According to the Foreign Minister, calculates the number of citizens who have been repatriated from Yemen so far since December 2014 amounted to 700 people after going through several times repatriation.

Foreign Minister, Retno, adding that the security situation in Yemen, particularly the western part of Yemen around the city of Aden and Sana’a, growing concern. Armed clashes between the warring parties increasingly widespread, making it difficult evacuation efforts undertaken.

According to Foreign Minister, his side has asked all parties in Yemen to adopt a humanitarian pause in order to provide an opportunity for civilians evacuated from Yemen.

In this case the Foreign Minister has ordered the Indonesia Permanent Representative to the United Nations to push the UN Security Council issued a resolution related the humanitarian pause.

“This opportunity will be used by the Government of Indonesia to undertake immediate evacuation of citizens (WNI) from Yemen,” Foreign Minister Retno Marsudi said.

According to Foreign Minister, so far more and more Indonesian citizens (WNI) in Aden who want to be evacuated after seeing an appeal from the government and the security situation in Yemen is erratic. (Dit. Infomed Kemlu/ES)