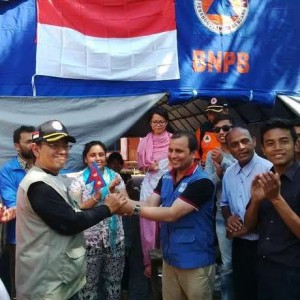 Ministry of Foreign Affairs makes sure that no Indonesian citizens (WNI) who are victims of the second earthquake, which rocked Nepal again.

Through Twitter account, @Portal_Kemlu_RI,  Tuesday (12/5), Ministry of Foreign Affairs mentions, “has occurred the earthquake at 7.4 on the Richter scale in Nepal. Up to now, no citizen (WNI) who injured due to the earthquake disaster.

Also mentioned that the Evacuation Team Indonesian WNI and Humanitarian Aid of the elements of the National Agency for Disaster Management (BNPB) and the Ministry of Foreign Affairs are also in a safe condition.

Ministry of Foreign Affairs also reported that all WNI, including volunteers from the “Medical Emergency Rescue Committee” (MER-C) as well as volunteers from the Association of Jungle Facer and Mountaineering-Wanadri, who was on his way to Gorkha reportedly safe.

Furthermore, Indonesia field hospital that is part of the humanitarian assistance to Nepal will continue to operate, even received additional new patients.

Second earthquake that rocked Nepal measuring to 7.4 on the Richter scale. The epicenter was located at 51 miles east of Kathmandu with a depth of 11 miles.

The earthquake was followed by aftershocks of 5.6 to 6.3 on the Richter scale for a further 30 minutes.

The epicenter was close to Everest Base Camp, which has been evacuated after an avalanche that was triggered by the earthquake last month, which killed 18 climbers.

The mountain climbers who want to climb the highest peak in the world have canceled Everest climbing season this year.

Last month’s earthquake, which registered a magnitude of 7.8 SR, killed at least 8,046 people and injured more than 17,800 people.

Earthquake in Nepal this time measuring 7.4 SR is estimated to have the potential to cause significant damage and landslides. (Humas Kemlu/ES)