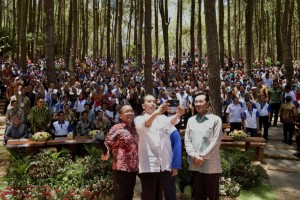 Forests do not only function as lungs of the world, but are also a source of peoples life, according to President Joko Jokowi Widodo.

The President made the statement at the opening ceremony of the National Level Forest Management Festival held at Mangunan pine forest, Dlingo District, Bantul Regency, Yogyakarta on Friday (28/9).

According to the President, Indonesia is a country blessed with abundant natural forests that contain great economic potentials for the people.

I have met several heads of state from Scandinavian countries such as Norway, Finland, and Denmark. They have shared their citizens daily life stories particularly on how their economic moves only from forestry sector, the President said.

However, according to the President, the existing forests in Indonesia have not been used properly in terms of economic value by the communities. This is the fact that we need to improve. Indonesian people living near forests should be more prosperous than they are today, the President added.

Therefore, the President added that the Government in the past few years has tried to solve the problems faced by the people who live near forest areas through social forestry program. The existing forests are managed by both the Government and the public in order to increase the peoples income, he said.

Four years ago, I ordered Minister of the Environment and Forestry to build business groups for people living around the forest, the President further said, adding that in the program, Forest Management Units (KPH) must be able to build community-based forest management as well as conserving forests.

President Jokowi went on say that one of KPHs duties is to guide the community to jointly utilize forest productively, sustainably and responsibly. The President also mentioned the wide range of economic and social benefits from forestry sector and these days many companies need raw materials from forests but the gap between demand and supply still remains wide.

So this is the KPHs duty to guide communities living around forests to use our forests to fill the gaps and to meet demands from forestry sector, the President said.

Therefore, on that occasion, the President expressed the Governments commitment to develop and run a social forestry program in more regions in the country for the welfare of the community, especially those living around the forest area. My job is to supervise related Ministers to carry the programs as planned, he added.

In the meantime, Minister of the Environment and Forestry Siti Nurbaya reported that the forestry business has actually given a real contribution. In 2017, following Presidents instruction, her Ministry has conducted an identification to examine employment opportunities opened by all sectors, she said.

Meanwhile in 2019, Siti continued, President Jokowi assigned her to rehabilitate the land of 240,000 hectares or 10 times bigger than the average, meaning that it will provide more jobs, but on the other hand, the people also cut wood trees from their private land covering of 102,000 hectares.

This is identical to the workforce of around 510,000 people with wood volume that rotates every year around 9.53 million cubic meters, especially from forests in the island Java, she concluded. (BPMI/EN) (STU/EP/Naster)