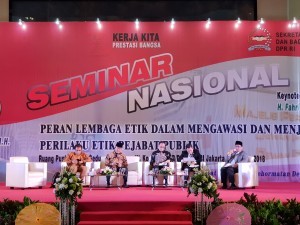 The atmosphere of the National Seminar event on theme The Role of Ethical Institutions in Supervising and Maintaining the Ethical Behavior of Public Officials in the Pustakaloka Room, Nusantara IV Building of Indonesian House of Representatives (DPR-RI), Jakarta, Monday (8/10). (Photo by: Anggun/Public Relations).

Former Chairman of the Constitutional Court Prof. Jimly Asshiddiqie, S.H., M.H. proposes that ethics regulating the behavior of public officials must be made more concrete like a law in ancient time.

In ancient time, a law was not written. As time goes by, it was written into and given a juridical philosophical basis, Jimly said at the National Seminar event adopting the theme The Role of Ethical Institutions in Supervising and Maintaining the Ethical Behavior of Public Officials in the Pustakaloka Room, Nusantara IV Building of Indonesian House of Representatives (DPR-RI), Jakarta, Monday (8/10).

According to Jimly, all countries are now competing to introduce a system to regulating the ethics of public officials. He added that almost all laws regulate state institutions, whether executive, legislative, and judicial or another institution and now all have adopted provisions on the code of ethics and committees of honorary assemblies upholding the code of ethics.

However, almost all things related to the ethics policy all over the world are still considered as a private matter and Jimly found it interesting because this understanding is influenced by secularism that separates religion from state. But now many countries, including the UK, the US, and Australia already have laws on ethics of public officers, he said.

Jimly added that we must be grateful because there already 2 bills on the ethics of state administration and the ethics of the people’s representative institutions in the DPR-RI. I just want to underline that there are efforts from us to restructure the ethical system of the state and we encourage the bills to be made a priority immediately, Jimly said.