Freeing Eva Bande, President Jokowi: Never Let Anyone Have to Go to Prison for Fighting for Peoples Rights 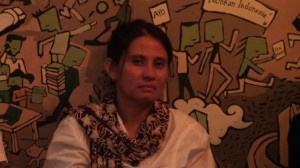 Freeing Eva Bande, President Jokowi: Never Let Anyone Have to Go to Prison for Fighting for Peoples Rights

In conjunction with the celebration of Mothers Day 2014 on Monday (22/12), President Joko Widodo (Jokowi) officially granted clemency to female activist Eva Susanti Bande who was previously sentenced by Luwuk District Court, Central Sulawesi, to four years in prison because she had been fighting for peoples rights to land.

The decision to grant the clemency was officially announced by President Jokowi when he was attending the celebration of Mothers Day 2014 at Ciracas Sports Stadium, East Jakarta, on Monday (22/12). The celebration was also attended by Eva Susanti Bande.

In my opinion, this is what we have to fight for continually. Never let female activists who fight for their rights, who fight for peoples rights, finally have to go to prison. Never let this incident take place again, he demanded.

Previously, when he attended the celebration of Human Rights Day in Yogyakarta on Tuesday (9/12), President Jokowi already expressed his firm intention to grant clemency to Eva Susanti Bande.

President Jokowi admitted that he had received Eva Susanti Bandes request for clemency previously. After due consideration of her request, President Jokowi decided to grant clemency to Eva.

In the celebration of Mothers Day 2014, Madam Eva should be already free and can join her husband and children, President Jokowi said at that time.

Eva Bande was arrested on Thurday, 15 May 2014, in Banguntapan Sub-district, Bantul Regency, Yogyakarta. The woman who is native of Luwuk, Banggai Regency, was arrested by the team from Luwuk District Attorneys Office in collaboration with the team from the Attorney Generals Office.

Eva is a female activist whose struggle mainly concerns agrarian affairs. She leads Central Sulawesi Peoples Oil-Palm Advocacy Group, a grass-roots organization which fights for farmers rights to regain their land seized forcefully by capital owners. Because of her activities, Eva Bande was arrested. She was considered to have violated law because she led farmers to fight against PT KLS, a palm oil company, in Piondo Village, Toili Sub-district.

The Supreme Court (MA) in its decision on 12 April 2013 sentenced Eva to four years in prison, in accordance with the decision of Central Sulawesi Appellate Court in February 2011 and the decision of Luwuk District Court in November 2010.

Eva was charged with committing crime as stipulated in Article 160 in conjunction with Article 55 paragraph (1) of Indonesias Penal Code (KUHP). Against the Supreme Courts decision, Eva then filed for a judicial review which was registered as case number 03/PID.PK/2014/PN.Lwk dated 21 August 2014. (*/ES)