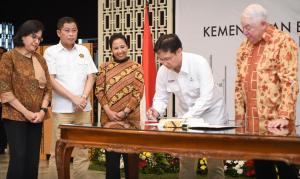 Divesting 51 percent of shares of mining company PT Freeport Indonesia (PTFI) from Freeport McMoRan Inc. (FCX) and Anglo-Australian mining giant Rio Tinto – which was completed by the signing of three agreements on Thursday (27/9) – is not easy, according to Minister of Finance Sri Mulyani Indrawati.

I need to state that the whole process is a remarkable effort made by President Joko Jokowi Widodo, who instructed the Ministers, on behalf of the Government, to conduct the negotiation, Sri Mulyani said in her Facebook account posted in Thursday (27/9).

I know exactly what our intentions are and by making the efforts in transparent manner, we managed to make PT Freeport Indonesia operate for the benefits of all Indonesian citizens, the Minister added.

In the meantime, Minister of Energy and Mineral Resources Ignasius Jonan said that after the signing of that agreements, the finalization of Freeports 51 percent share divestment is targeted to be completed by the end of this month. The change in share ownership will officially be effective after a payment transaction of US$3.85 billion, equivalent to Rp56 trillion, to FCX and will be completed before the end of this year Jonan added.

Also on that occasion, Managing Director of PT Inalum Budi Gunadi Sadikin said that transfer payments of Freeport divestment is derived from a syndicate of banks. The funds will be available by the end of this month. We also expect that all regulatory documents and permits required will be completed at the same time, Budi concluded. (ES) (RAS/EP/Naster)