From November 18, SBY Will Become President of the GGGI Assembly 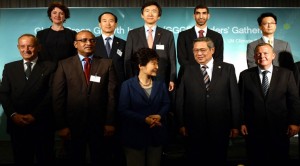 From November 18, SBY Will Become President of the GGGI Assembly

President Susilo Bambang Yudhoyono (SBY), who will end his term on October 20, 2014, has been waiting for a new assignment. If nothing gets in his way, from the next November 18, SBY will carry new duties as President of the Assembly and Chairman of the Board of Global Green Growth Institute (GGGI).

The willingness of SBY to accept the offer to lead the organization that based in Seoul, South Korea, and has operations offices in five continents, was conveyed formally when he gave a speech at the reception of GGGI leaders, at United Nation Headquarters, New York, United States of America on Tuesday (23/9) afternoon local time or on Wednesday (24/9) morning, west part of Indonesia time.

“I also think that this is as a recognition of the Indonesia achievement in environmental economic mainstream (green economy),” said Yudhoyono who earlier also said that the offer to him to lead GGGI as an opportunity to take inclusive and sustainable growth actions.

SBY himself felt pride of the honor and faith in him to lead GGGI. “Environmental conservation has become a personal passion of mine. At the same time it has also become an important issue, not only for Indonesia but also for the world at large,” he said.
As the President of the Assembly and Chairman of the Board of GGGI, SBY will replace the former Prime Minister of Denmark Lars Lokke Rasmussen and former Prime Minister of Guyana Bharrat Jagdeo as well, who currently serves as Chairman of the Board and President of the GGGI Assembly.

To Bharrat Jagdeo and Lars Rasmussen, who will be replaced by him, Yudhoyono expressed his high appreciation for their dedication and their achievements. Yudhoyono also congratulated GGGI which has become a leading international forum in a short time.

Finally, I have confidence that GGGI will find innovative paths to global partnership for effective alignment between economic growth and environmental sustainability. I look forward to working with you and other members of GGGI in this effort,” said SBY.
GGGI Leader Reception Event was held by the Government of South Korea, as the GGGI initiator and the GGGI headquarters at once. South Korean President Park Geun-hye attended in the event, as well as Rasmussen and Jagdeo, and also the Director General Yvo de Boer who had ever come to Jakarta to ask Yudhoyono to lead GGGI on the last September 9. Also present were the representatives of the GGGI member countries.

South Korean President Park Geun-hye in his speech explained his reason to ask Yudhoyono to lead GGGI. Prak assessed that because of the high efforts under the leadership of President Yudhoyono, Indonesia has now become part of solutions, so the world puts forest conservation as a core part of the environmental problems.

“The international community put their trust in Yudhoyono as individuals and the head of state and government,” said Park when added that the world acknowledge the contribution of Indonesia both formally and informally for the management of environmental issues in general.

“Indonesia is a country that is capable of bridging the various interests that need to be reconciled,” said the South Korean President.

Park explained that GGGI deemed it necessary that the partnerships between governments, civil society, academia, and business entrepreneurs need to be developed,. To do that a leadership was required to unify all of these components. “And many people perceive Yudhoyono as a figure who is able to speak out and unite the opposite interests,” said Park.

GGGI has two bodies, the Assembly and the Board. The Assembly is the supreme organ, while the Board acts as an executive. This institutions aim to help provide assistance to developing countries to formulate environmentally friendly development. GGGI also provides assistance for cooperation programs of government and private sectors. The organization that headquarter is in Seoul has operating offices on five continents, and has 20 member countries. (Polhukam/DP)