Fully Operational on 1 July, President Jokowi Will Inaugurate the BPJS Employment in Cilacap 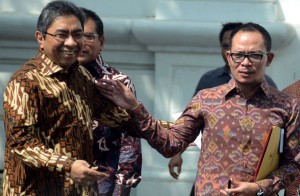 Minister of Manpower, Hanif Dhakiri, and Director of BPJS Employment, Elvyn Masassya, after received by President Jokowi, at the President’s office, Jakarta, Thursday (4/6)

After the Social Security Agency (BPJS) Health has fully operational on January 1, 2014, the government ready to operate in full BPJS Employment from 1 July 2015.

Director of BPJS Employment Elvyn G. Masassya argued, inauguration of fully operation BPJS Employment will be performed by the President of Joko Widodo (Jokowi) in Cilacap, Central Java, on June 30.

“I reported about our readiness for full operation July 1, 2015 which Insha Allah will be launched by the President in Cilacap on June 30, 2015,” Elvyn said.

Director of BPJS Employment Elvyn G. Masassya added., his side made preparations in full, around the time full operations in July 1, 2015, of which complements the problems associated regulations. Hopefully, this problem could be completed by mid June 2015.

Regarding the composition of assets investment worth Rp 203 trillion, Elvyn added, as much as 44 percent in bonds, deposits 24 percent, 22 percent stocks, mutual funds 6 percent, remaining at inclusion and on the property.

“Rusunawa in six locations (West Java, Jabodetabek, Central Java, East Java, and South Sulawesi). The total we have allocated for the inclusion of around Rp 360 billion. For low-income workers and the rental flats,” Elvyn said. (Humas Setkab/ES