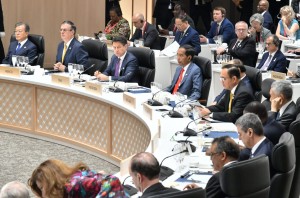 The President made the statement during the second session of the G20 Summit on the innovation of the digital economy, in Japans Osaka, Friday (28/6).

“These three fields are expected to reduce inequality as mentioned in the second part of the President’s statement, which is about the inclusive general economy,” Retno said on Friday (28/6).

She added that in the end, the technological leap should benefit everyone.

Thus, the closing statement of the Presidents speech was No one left behind, she said.

Previously, President Jokowi also stated about data free flow. According to Retno, President Jokowi offered his support on Japans flexion but insisted on the need to formulate norms and rules of international law that must be agreed along with the deadline to implement them.

The President, she added, also said that if the norms and rules of international law have not been established, the data free flow policy might be misused by irresponsible parties. (EN/GUN/ES)