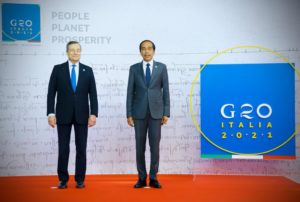 At the venue, President Joko Widodo was welcomed by Italian Prime Minister Mario Draghi as the host of the summit.

Other world leaders also attended the G20 Summit, which adopted the theme of “People, Planet, Prosperity”.

After the Heads of State attended the welcoming ceremony, they all proceeded to a photo session.

After the photo session, the opening ceremony of the summit was held, followed by Session I meeting adopting the theme of “Global Economy and Global Health”.

In the meantime, Indonesian Foreign Minister Retno L.P. Marsudi stated that President Joko Widodo also had an agenda that day to attend the side event concerning support for small and medium enterprises, as well as business owned by women and the President was specially asked to be the speaker.

“Later, the President will also attend a cultural event and a banquet hosted by Italian Prime Minister,” Minister Retno said in her press statement on Friday night (29/10) at local time.

The President was also scheduled to have bilateral meetings with Indian, Turkey, and World Bank Leaders.

Minister of Foreign Affairs explained that the agenda for bilateral meetings can change dynamically according to the schedule of the Leaders.

“There may be other bilateral meetings held by requests and we keep trying to adjust the schedules of the President and other leaders,” Retno said. (FID/UN) (AW/EP)