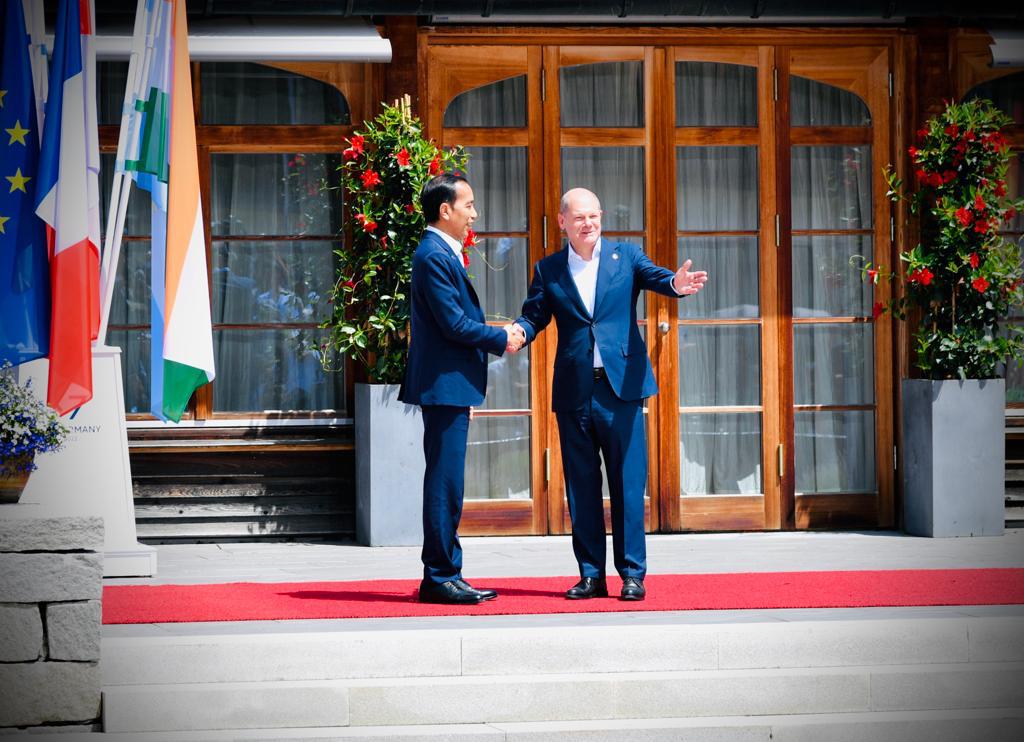 President Jokowi was greeted by German Chancellor Olaf Scholz at the venue of the G7 Summit at Schloss Elmau Castle, Germany, Monday (06/27). (Photo by: BPMI of Presidential Secretariat/Laily Rachev)

President Joko “Jokowi” Widodo Monday (06/27) arrived at the venue of the G7 Summit taking place at Schloss Elmau Castle in Germany, and was welcomed by German Chancellor Olaf Scholz.

During the official welcoming session, the President attended the event along with several leaders of the G7 partner countries, namely President of Argentina Alberto Fernández, Prime Minister of India Narendra Modi, President of Senegal Macky Sall, and President of South African Cyril Ramaphosa.

On that occasion, President Jokowi also took a group photo session. On this photo session, the Head of State stood between Chancellor of Germany Olaf Scholz and President of the United States Joe Biden.

Afterwards, the President is slated to attend two sessions of the G7 Summit.

At the 48th G7 Summit this time, the President is also scheduled to hold a bilateral meeting with a number of state leaders in attendance.

For the record, the G7 Summit has been an annual meeting consisting of the United States, Britain, Italy, Japan, Germany, Canada and France. While, Indonesia is attending the Summit as one of the G7 partner countries as well as the president of the 2022 G20 forum. (BPMI of Presidential Secretariat/UN) (RIF/LW)