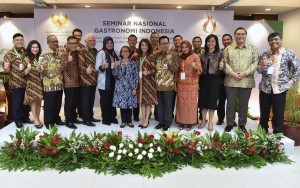 Although currently Indonesias nation brand is not as strong as the neighboring countries, the Government is quite optimistic that Indonesia will be able to increase its branding, particularly through culinary.

The popularity of Indonesian food was once recognized by CNN when they released the Worlds 50 Best Foods list, which include rendang as one of the worlds best food in 2017, said Deputy Cabinet Secretary Ratih Nurdiati while delivering remarks at the Gastronomic National Seminar, at the 4th floor of Building III, Ministry of State Secretariat, Jakarta, Tuesday (23/10).

According to Ratih, cuisine has dual potentials: outward and inward. For outward, it can serve as soft diplomacy for our nation-branding, while for inward it can grow our spirit of nationality. She cited an example of our tradition to eat yellow rice and drin tea, as a way to unite the community.

People will attend the traditional events and put aside their political interest for a while to celebrate their togetherness and cultural identity, Ratih said.

As for outward, Ratih said that culinary was considered as one of the characteristics of a cultural advance of a nation which closely relates to the wealth  and pride of a nations culinary art. Sha also added that every food festival had always been packed with visitors.

Food festivals, especially traditional foods, need to be developed, to strengthen the national identity as well as to improve our tourism, which is also important for diplomacy Ratih added.

But, Ratih reminded there are several challenges in promoting culinary as a tool of diplomacy. First, synergies between ministries / institutions need to be improved to implement policies on culinary diplomacy.

Second, the people still encounter some issues in gaining acces forcapital to open Indonesian restaurant business abroad and to get the ingredients to maintain the authenticity of the Indonesian menus.

Third, we have not much introduced the Indonesian traditional food to our foreign guests in many occasions. However, President Joko Jokowi Widodo always serves our traditional food and coffee whenever he receives the Head of States/ Head of Government.

Fourth, the marketing of gastronomic-based tourism packages offered to foreign tourists is not optimal yet.

Ratih expressed hope that the Gastronomic National Seminar with theme of The Role of Indonesian Gastronomy in Boosting Gastro-preneurship and Strengthening Indonesian Diplomacy was able to meet common understanding of the problems.

We need to find a way to promote the culinary diplomacy as one of the outputs of this seminar, said Ratih.

Previously, the Expert Staff of the Cabinet Secretariat for Law and International Relations, Thanon Aria Dewangga said that the seminar held in collaboration between the Cabinet Secretariat and the Indonesian Gastronomy Association (IGA) wasattended by delegates from 34 provincial governments and 8 district / city representatives, relevant ministries / institutions, associations, as well as academics and gastronomic practitioners as members of the IGA.

Thanon wished that this seminar can produce a policy brief related to gastronomy, which will be submitted to the Cabinet Secretary, and forwarded to the President.

Our spirit is growing because we imitate the President who is always energized to build Indonesia from all aspects, including introducing our food to the international stage, said Thanon. (DNA / RAH / ES) (STU/LW/Naster)