Give Criticism, Teten: Singapore Needs to Understand Our Problems 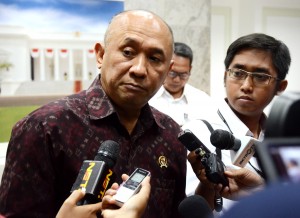 Presidential Chief of Staff Teten Masduki asserted that the Government will take action and keep trying to extinguish forest and peatland fires which caused haze calamity in several areas, including in several neighbouring countries, namely Singapore and Malaysia.

However, regarding the criticism delivered by Singapores Foreign Affairs Minister K Shanmugam who protested on how Indonesian Government handle forest and peatland fires, Teten requested Singapore to understand our problems.

In my opinion, forest and peatland fires which spreaded, are causing hazes that spread through many areas, but I think Singapore needs to understand our problems. Extinguishing the fire is not  simple, Teten said to the reporters after accompanying the Managing Director and Managers of Indonesian Cement Association (ASI) met President Joko Widodo, on Monday (28/9), at the Merdeka Palace, Jakarta.

The Presidential Chief of Staff reminded all that Singapore has enjoyed oxygen supply from Indonesia. For 9 months, they enjoyed the oxygen and we knew there are many agricultural and mining products that flow into Singapores export commodities, Teten said.

According to Teten, the Government will take action. They will keep trying to extinguish fire in forest and peatland which caused haze calamity in several areas and neighbouring countries.

The Government, Teten added, even think of how to stop the forest fire which has been going on 17 years now. We understand that several economic incentive issues caused the continued fire. Besides technical aspect, for example flammable peatland, it is possible that there is an intention or people are just indifferent. That is what I am thinking about, Teten said.

So, Teten added, the Government must think about the disincentive so that the attempts to continously burning the forest could be reduced.

The Presidential Chief of Staff previously said that after President Joko Widodo visited South and Central Kalimantan on Wednesday-Friday (23-25 September),  the action to extinguish fire is still conducted.

Regarding health problems, Teten said that Minister of Health has distributed masks and other necessities. The Government is still monitoring the development on the field.

The one that is still being prepared at the Coordinating Ministry for the Economy is regarding the disincentive to forest arsonist economically, because we knew that economic incentives make concessions land for plantation grow rapidly, Teten added.

When the reporters asked the names of companies which has the indication of burning the forest and peatland, Teten said that the Ministry of Environment and Forestry had reported them to President Joko Widodo.

I think several names are already given to the police. I do not remember how many, Teten answered the reporters question. (DID/AGG/ES)(RAS/MMD/YM-Naster/Sy)