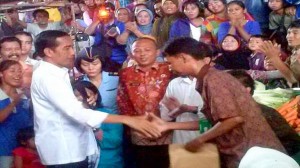 The target of Prosperous Card is completed; it will have been finished before the year end. Just like in Bengkulu Province, it is all completed this week, President Jokowi said.

He said that there were no obstacles in the distribution of PSKS that the aid program could be completed in December 2014.

President asked the people who waited in a big tent at the yard of Bengkulu Post Office several times such as how long they had been waiting.

President also gave briefing to Bengkulu Governor and the representatives of Post Office in order they really had concern in the service of distributing the program.

In the yard of the Post Office there were also banners saying Welcome the Recipients of Saving Program of Prosperous Family (PSKS) and the terms and conditions of it.

After distributing the cards of KIS, KIP and PKPS at Bengkulu Post Office which was located in Tanah Patah, Bengkulu, President Joko Widodo and the entourage continued the monitoring to Pilot Traditional Market Panorama in Bengkulu.

In the opportunity, President took time to have dialog with the merchants.

I see some parts of this market are clean yet some others are not. Do you want this market to be built bigger or not? President Jokowi started the dialog.

The merchants who had been waiting for the arrival of the number 1 person in the country, all said simultaneously Yes, Sir

Then the President said that it would be soon followed up using the fund from central government.

The merchants greeted it with thunderous applause.

When given opportunity to express their aspiration, one of the merchants said that there was a negligence of merchants selling at roadside, so the buyers would not come inside the market to shop.

Responding to the problem, President Jokowi said It should be the Mayors duty to discipline the merchants selling at the roadside. All merchants should be inside the market so buyers will come into the market. You can do it, cant you Mr. Mayor? the President said while looking at Bengkulu Mayor Helmi Hasan who accompanied him in the monitoring.

Then, the President asked, Is there cooperative here?

The Chairman of Merchant Cooperative responded it with standing.

How much is the capital of your cooperative now? the President asked.

The President asked other merchants Does this cooperative have any benefits?

Some merchants simultaneously said, No Sir!

Responding the answer, the President said, Well, you heard it yourself. What is the obstacle?

The Cooperative Chairman said, Capital, Sir. We are not able to give our best service to all members.

Spontaneously the President followed it up by giving financial aid to the cooperative chairman while saying, I give this capital aid of 250 million Rupiahs, please use it your best. If you use syaria system, the profit-sharing system should not burden the members! the President asserted.

The merchants greeted it cheerfully. After giving the aid, the President closed the dialog by ordering all merchants to obey the regulations not to sell at the roadside, as they themselves would suffer from losses.

Walking out of the market towards presidential car, President and First Lady still shook the hands of the people jostling and trying to take picture.

After visiting Panorama market, the President continued the journey to the residence of the First Indonesian President, Ir. Soekarno, prior to leaving to Fatmawati Airport to continue his working visit to Riau Province. (Ram/Humas Setkab/ES)