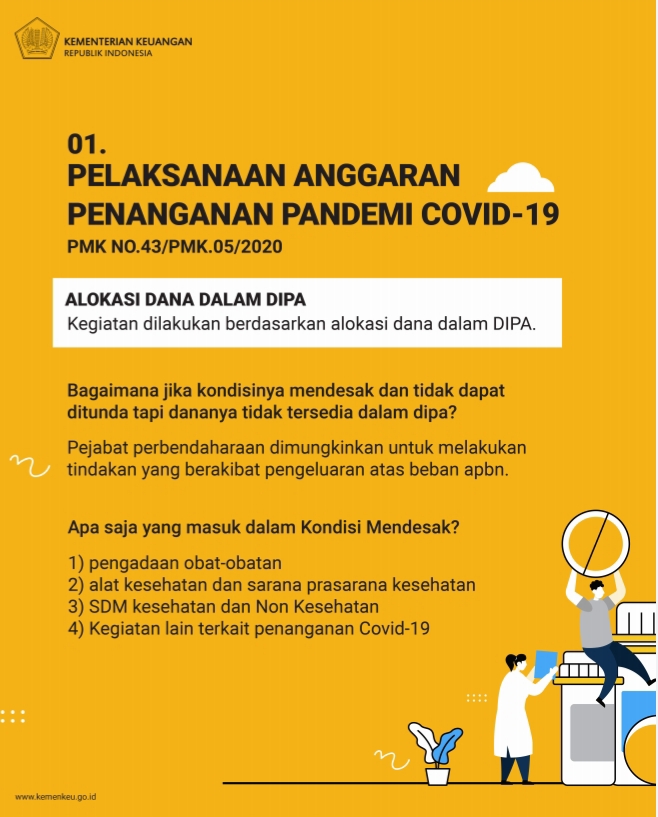 Infographics on Budget Implementation during the COVID-19 pandemic. (Source: Ministry of Finance).

Global volatility has begun to subside last month, according to Indonesian Minister of Finance Sri Mulyani.

Sri Mulyani, who is also chairperson of the Financial System Stability Committee (KSSK), also noted that China’s economy has shown recovery following a deep contraction in the first quarter this year due to the pandemic.

China’s Purchasing Managers’ Index (PMI) also started to rise in March, along with the reopening of its various economic activities, the Minister added.

Commenting on Indonesia’s economy, the Minister said: “(Indonesia) State Budget revenues stood at 16.8%, growing by 7.7%, but tax revenue growth sees negative 2.5 percent. State expenditure absorption reached 17.8% growing by 0.1%, while the deficit is recorded at Rp76.4 trillion or 0.45% of gross domestic product (GDP). The Government will continue to monitor the development of these economic indicators,” the Minister said in a virtual press statement, Monday (11/5).

Regarding development of the country’s financial sector, the Minister said that according to the Financial Services Authority (OJK), Indonesia’s financial service sector until April remained stable despite the trend in weakened real sector and potential weakening of the financial sector due to arrears in principal and interest payments.

As of 22 April, liquidity adequacy indicator also shows a positive trend as seen from the ratio of liquid assets to third party funds (TPF) at 22.36 percent (December 2019: 20.86 percent), which is still above the threshold, while  intermediary performance of financial service institutions as of March is still supported by banking resilience, liquidity, and money market stability.

Sri Mulyani further said the success of handling the COVID-19 pandemic can greatly affect the domino effect on the economy and financial sector, adding that the KSSK will continue to strengthen its synergy and adopt extensive measures to maintain macroeconomic and financial system stability. (MoF/EN)