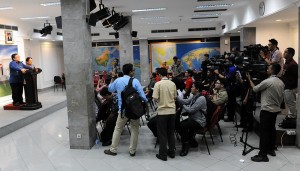 The steps of state revenue optimization that undertaken by the government of President Joko Widodo (Jokowi) through increasing of tax revenue and diversion in fuel prices subsidies (BBM) has shown results. Minister of Finance Bambang Brodjonegoro mentioned, for the State Budget Amendment (APBN-P) 2015 available fiscal space amounted to Rp 230 trillion.

According to Minister of Finance Bambang Brodjonegoro, fiscal space amounted to Rp 230 trillion will be allocated to the various expenditures with virtue or most of it is infrastructure expenditure.

“3 (three) ministries are getting the biggest additional budget of ministries/agencies are Ministry of Public Works, Ministry of Transportation, and Ministry of Agriculture,” said Bambang to reporters after plenary cabinet session in the office of President, Jakarta, Wednesday (24/12) afternoon. Besides the three ministries, the additional budget from tax revenues and diverts fuel oil (BBM) subsidy will be allocated to social protection programs.

Bambang reminded that the use of village funds is not a block grand which can be used without restraint. But it is directed to a program that became a national program. “For 2015, the President direction that the village funds should focus on infrastructure,” he said.

Bambang give an example, if the village is a food producer, for example rice, it should focus on irrigation. But other villages may need for the roads, while other villages may be for the market. “So it will vary widely, the most important is the guidance is clear,” he said (Humas Setkab/ES)