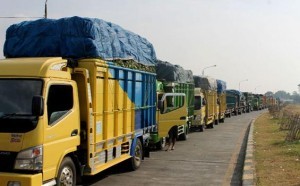 To reduce traffic congestion during Christmas and New Year, the Ministry of Transportation cq. Director General of Land Transportation has regulated the operation of transport trucks with three axles or more.

This operation is regulated in a Decree of Director General Number SK. 6474/AJ.201/DRJD/2017 dated 14 December 2017. Its almost the same with last year, but this year, the ban period is shorter, says Director General of Land Transportation Budi Setiyadi in Jakarta.

This adjustment is expected to be able to maintain the stability of staple food prices during Christmas and New Year, Budi says.

The ban is applied for several types of transport trucks, such as: transport trucks carrying sand, soil, minerals, and coal; or trucks with the amount of weight allowed (JBI) more than 14,000 (fourteen thousand) kilograms; and trucks have more than three axles and have trailers attached.