Government Committed to Continuing the Development of Border Areas 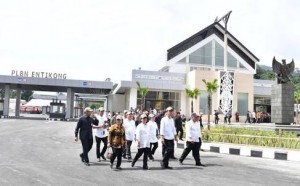 Since the beginning of his office, President Joko Jokowi Widodo has determined to build Indonesia from the outskirts. Therefore, development at border areas become the focus of the President. A border should be the countrys front yard. So, it must be pretty.

With the increase of economy and social infrastructures, the life of the people living at the border areas can also increase because these area could be the new center for economic growth. According to acting Secretary of National Border Management Agency (BNPP), Hadi Prabowo, the Government boosts infrastructure development relating with the communitys basic social needs, for example education facilities. The Government has constructed elementary schools in 32 provinces, junior high schools in 20 priority locations, as well as high schools and vocational schools in 30 priority locations.<>

In addition, clean water supply system has been also established in 56 priority locations and facilities for raw water supply has been developed in 21 locations.

Health infrastructure, for example Community Health Center (Puskesmas), has been constructed in 44 priority locations. There are 575 health workers working in 68 Puskesmas, for example in Saumlaki, Hadi says.

Meanwhile in East Nusa Tenggara, the target of road development is 176.2 kilometers and only 25.10 kilometers of it remaining unfinished. In Papua, only 215.6 kilometers of road has not finished yet.

From 2015 to 2017, the Government has developed 36 airports and eight sea ports. Furthermore, it also boosts the procurement of pioneer ship in East Nusa Tenggara and North Kalimantan.

Regarding the development of Integrated Cross-Border Post (PLBN), according to Hadi, by the end of the year, the target of development of seven border posts based on the 2015 Strategic Plan has been realized. Even, five of them have been inaugurated by the President during 2016-2017 with asset revenue reaches Rp944 billion. In the future, the Government to build PLBN in nine locations. At the moment, BNPP is drawing up the regulations as well as master plan and the construction is expected to be realized by 2019. (Humas Kemendagri/EN) (MMB/YM/Naster)