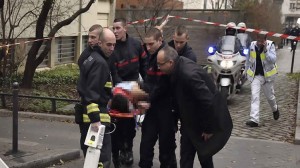 The Government of Indonesian condemns the attack by a group of gunmen on the building and employees of the Charlie Hebdo weekly, in French, which killed 12 people, including the editor of the magazine.

The Ministry of Foreign Affairs (Kemlu) RI Site on Wednesday (7/1) night conveyed, the Government of Indonesia express deepest condolences to the Government and People of France, especially to the families of the victims.

“The Indonesian government insists that any violent acts cannot be justified,” as quoted by the site

According to the Ministry of Foreign Affairs, Government of Indonesia supports the efforts of the Government of French to arrest and prosecute the perpetrators. From the coordination results with Indonesian Embassy (KBRI) Paris, no casualties Indonesian citizens in that tragedy.

The Criticism of Muslim Leaders

Related to the attack, the French police suspect the involvement of men, namely Said Kouachi, Cherif Kouachi, and Hamyd Mourad as perpetrators of the attack.

The attack was denounced by Muslim leaders of France. French Muslim Council (CFCM) in a press release said that the attack that killed 12 people was an attack on democracy and freedom of the press.

President of the French Muslim Council (CFCM) Dalil Boubakeur, who is also the leader of the Mosque of Paris, plans to visit the location of the attack. CFCM also called for people not to panic and urged the Muslims to be aware of the manipulation of extremists.

“The community of Muslims have to practice persistence against the possibility of manipulation by extremist groups,” added Boubakeur (Humas Kemlu/ES)