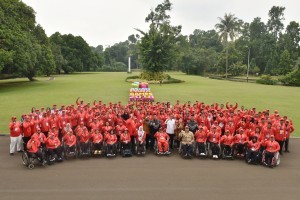 Minister of Youth and Sports Imam Nahrawi confirmed cash bonuses for Indonesian athletes and coaches who won medals at the 2018 Asian Para Games will be immediately transferred to their respective bank accounts with no tax deductions.

The bonus is without any tax deduction because the tax is paid by the Government, Imam told reporters after accompanying President Joko Widodo to distribute cash bonuses to the 2018 Asian Para Games medal winners at Bogor Presidential Palace, West Java province, Saturday (10/13).

According to Imam,  every category has its own calculation. For example, if an athlete wins their first gold in a single match they will get Rp1.5 billion. Meanwhile if  the athlete gets the second gold, there will be more detailed calculation. The calculation is similar to what we have done to the 2018 Asian Games medalists, he said.

Regarding the 30 percent deduction by the National Paralympic Committee (NPC), Imam promised to recheck the info. However, he said that it is  an internal issue of the NPC .

As for athletes who have not win a medal, as mentioned earlier by President Joko Widodo, Imam said that athletes, coaches and assistant coaches will get Rp 20 million each.

Following Indonesias success in achieving 34 gold medals, 44 silver medals and 50 bronze medals in the Para Games, Imam said that it was still not enough to compete in Tokyo 2020 Paralympic.

But at least, Imam added, 35 people may be joining the Tokyo Paralympic.

From the quantitative side (the number of medals), it has exceeded the 2016 Paralympics in Brazil. Meanwhile from the qualitative evaluation, we are very optimistic to be successful. After this years Games there will be a long-term training  until the next competition in 2020, Imam concluded. (UN / OJI / ES) (STU/MMB/Naster)