On the second day of his visit to South Sulawesi, President Joko Jokowi Widodo, accompanied by First Lady Ibu 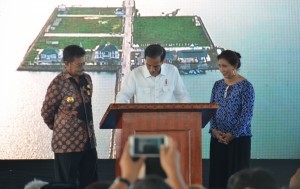 On this occasion, the President handed over insurance cards for ten thousand fishermen, represented by 18 representatives from South Sulawesi as well as six representatives of the beneficiary of fishermen insurance death claim. Meanwhile,  the Ministry of Marine Affairs and Fisheries handed over five 3GT fishing boats.

The President explained that the Government has distributed around 1 million insurance cards to the fishermen from Sabang to Merauke. The President thought that this amount is not small, and the premium insurance is Rp175,000 per year.

Later, the number rises 1 million each year. When the fund is ready, there will be 2 million recipients, and then 3 million fishermen. There will be more recipients every year. What is this for? To give a guarantee. Should there is something happen at the sea, the family will get insurance that will guarantee the survival of the wives and children, the President said.

According to the President, the insurance is covered by the Ministry of Marine Affairs and Fisheries. The President guarantees that the program will continued because the Government does not want the family suffers if something bad happens to a fisherman.

In regards to the Untia Port that was just inaugurated, President Jokowi said that this port will be continued to be built and developed because the port in Portere, that during this time serves the activity of fishing boats in the area, is very busy.

Concerning the bad road, the President admitted that he has called the Minister of Public Works and Public Housing to fix it.

So, the Untia port is a solution to increase fish production in South Sulawesi, in particularly Makassar, because the location, which is in industrial area, is strategic, the President said.

The President reminded that the target of fishery export in South Sulawesi is quite big; it is 10 percent of national export of fishery products. Therefore, the development of Untia Port is expected to contribute to other fishery ports, such as Bone, Paotere, port in Bentenge, in Kajang, and Tongke-Tongke.

Previously, Minister of Marine Affairs and Fisheries Susi Pudjiastuti, in her report, said that the development is fishery sector shows the biggest achievement. The Minister said that although the number of ships reduces but the catches are bigger.

The Minister reminded that based on the Presidential Instruction Number 7 of 2016, the ports, for example Untia, should not face eviction problem.

According to the Minister, Untia port is able to serve 300 ships and it also gives opportunity or Rusian investors to build a cold storage cooperating with a State-Owned Enterprise, Perindo.