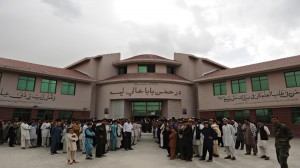 The government of Indonesia decides to grant 5 billions rupiah to Afghanistan to build a mosque in Ahmad Shah Baba Mina, Kabul.

The grant is aimed to strengthen the ties between the two countries and help the reconciliation process of local people.

The Presidential Decree (Keppres) also explains the grant be taken from the state budget (APBN), distributed through Noor Educational and Capacity Development Organization (NECDO). This grant is to finance construction of a mosque in Ahmad Shah Baba Mina, Kabul, Afghanistan, article 1 (1).

This decree is come to effect on the date specified, stated at the end of the decree.(Pusdatin/ES)(Ifp)