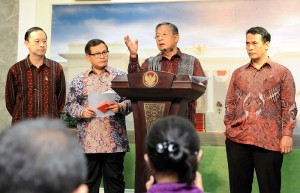 Coordinating Minister for the Economy Darmin Nasution, accompanied by Cabinet Secretary, Minister of Trade, and Minister of Agriculture launced the 9th Policy Package, at the Presidential Office (27/1)

In order to boost economic growth and to reach 97.2 percent of electrification ratio in 2019, the Government launched the Economic Policy Package IX which more focuses on the effort to accelerate infrastructure development in electricity. Furthermore, in the policy package, the Government also issued a new regulation in the policy on livestock supply and/or animal products in specific sectors.

Coordinating Minister for the Economy Darmin Nasution said that until 2015, this country has installed 53 GW of electricity, and sold 220 TWH electric power. The current electrification ratio is 87.5 percent.

To reach 97.2 percent electrification ratio in 2019, it needs 8.8 percent of infrastructure development in electricity per year. It was based on the economic growth which projected to reach 6 percent per year, with 1.2 elasticity assumptions, Darmin said to the reporters during the launching of Economic Policy Package IX, at the Presidential Office, Jakarta, on Wednesday (27/1) afternoon.

The Government will also support several measures from PLN, such as ensuring the primary energy supply, ensuring the budget in a form of State Capital Injection (PMN), and others. They also ensure the facilities of new Sustainable Energy Development, simplifying permits through one-stop integrated service (PTSP), solving conflicts on spatial sector, land acquisition and its settlement in legal issues, as well as the establishment of business entity which becomes PLN partner on electricity supply, Darmin explained.

Besides the electricity, the Economic Policy Package IX also includes the policy on livestocks supply and/or animal products in specific sectors. The policy is based on the demand of beef in the country which continue to increase every year. In 2016, the national demand of beef is 2.61 per capita, that makes the national demand for a year is 674.69 thousand tons or about 3.9 million cows, Darmin explained.

According to Darmin, the Government actually has done several measures to increase the number of beef supply and production, and to strengthen the institution through People Farming Center (SPR). However, because the efforts take times, it must be accompanied with exported beef supply in order to meet the demand.

Considering the limited number of supplier countries, Darmin added, the Government must expand the access to certain countries that meet the animal health requirements set by the World Organization for Animal Health (OIE), in order to add alternative sources of livestock suppliers.

Therefore, the Minister of Agriculture will set the countries or zones in a country, business entity or farm to supply livestock and/or animal products according to risk analysis with regard to the provisions of the OIE.

Thus, Darmin said, livestock and animal products import in a certain condition could be performed, for example, when disaster occurs, when the beef supply is lacking, or when the price of beef increases and could trigger inflation and affect the stability of prices.

The policy is expected be able to stabilize meat supply in the country and provide affordable price, as well as improve farmers prosperity, Darmin said. (FID/DND/JAY/OJI/ES) (RAS/MMD/YM/Naster)