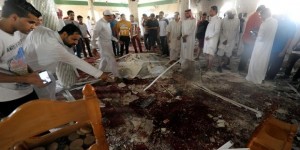 The location of suicide bomb attack in Kuwait City, Friday (26/6)

The Government of Indonesian condemned the terrorist attacks on June 26, 2015 in the three countries that caused many civilian casualties.

The attack occurred in the form of suicide bomb attack in Kuwait City during Friday prayers, that killing 13 people, terror attacks in the Riu Imperial Marhaba Hotel in Port El Kantaoui, Tunis, which until today, killing 39 tourists, and wounding dozens of others, as well as terror attacks on chemical plants “Air Products”, located in Isere, about 25 km south of Lyon France that killed one person and two others were injured.

These three terror attacks have resulted in a total of 51 people dead and several injured.

“According to information received from the Indonesian Embassy in the three countries, until now there has been no report related to citizens who become victims, in the three terror,” reads a press release of the Ministry of Foreign Affairs, on Saturday (27/6).

The Government of Indonesia, said the press release, offered condolences and deep sympathy to the Government of Kuwait, Tunis and France as well as the families of the victims. Terror attacks in the three countries on the same day returned indicate that the threat of terror knows no boundaries.

“The Government of Indonesian reiterated the support to the joint efforts of the international community to combat the various groups of the radical movement,” Ministry of Foreign Affairs said.

To Indonesian citizens who were abroad, the Government of Indonesia again reminded that they continue to increase their vigilance and keep themselves, avoid places that could be the terror targets and so as not to get involved with radical groups.