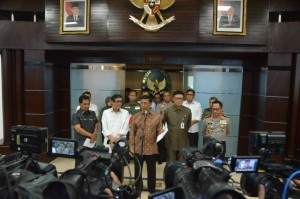 The Government officially disbanded a mass organization, Hizbut Tahrir Indonesia (HTI), considering that this organization does not have a positive role in development process to achieve national goals.

The Coordinating Minister firmly said that the activities of HTI indicate that the organization strongly contradict the goals, principles, and traits enshrined in Pancasila (the Five Principles) and the 1945 Constitution, as regulated under the Law Number 17 of 2013 on Mass Organizations.

Their activities have encouraged conflicts in the community that threaten public security and order and undermine the unity of the Unitary State of the Republic of Indonesia, Wiranto said.

For this reason, as well as taking into account public opinion on this matter, the Coordinating Minister added that the Government needs to take firm legal measures to disband HTI.

This decision doesnt mean the Government is against Islamic mass organizations. This move is taken to maintain and safeguard the unity of Indonesia based on Pancasila and the 1945 Constitution, the Coordinating Minister concluded. (EN/ES)(MMB/YM/Naster)