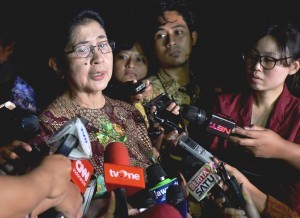 Minister of Health responds to the journalists questions after attending Limited Meeting on the Handling of Diphtheria at Bogor Presidential Palace, Wednesday (27/12) (Photo: PR/Agung)

The Government continues to handle the spread of diphtheria by taking a number of measures, among others by promoting the Outbreak Response Immunization (ORI). After attending Limited Meeting on the Handling of Diphtheria at Bogor Presidential Palace, Minister of Health Nila F. Moeloek says that regional health agencies have been provided with diphtheria vaccines.

Central and Regional Governments collaborate to carry out ORI because the spread of the disease can only be halted by immunization. Immunization boosts our immunity so we will not be contracted by the bacteria, the Minister says.<>

Since there are a number of reported cases, the Government has categorized the outbreak as an extraordinary event. This status is an early warning that everyone must pay close attention to.

The Government, through PT Biofarma, keeps producing diphtheria vaccine so that the distribution of the vaccine runs smoothly until next January. Everyone who has not been vaccinated must be vaccinated, the Minister concludes and asks people to get diphtheria immunization. (RMI/AGG/EN) (MMB/YM/Naster)