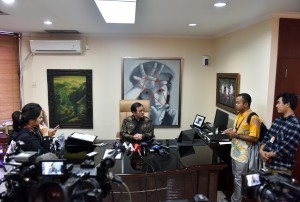 Cabinet Secretary Pramono Anung said that President Joko Jokowi Widodo does not get offended by the #2019ChangePresident campaign.

The Cabinet Secretary made the statement when answering questions from journalists at his office in Jakarta, Wednesday (29/8).

Pramono also denied rumor that the Government violates freedom of expression; in fact, he added, the campaign period has not even started.

“When the campaign period starts, everyone is free to launch the campaign, Pramono said, adding that Indonesia is a democratic country and everyone has to respect the rules of the game.

Pramono further said that it is not fair when someone violates the rules of the game then accuses Government of being anti-democratic and maintained that the Government upholds the principles of democracy.

For the record, the campaign period is set to start from 23 September 2018 until 13 April 2019, while the legislative election and the Presidential election is scheduled to take place simultaneously on 17 April 2019.