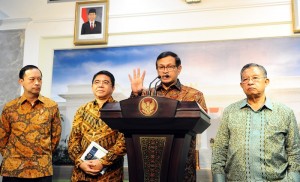 Cabinet Secretary together with Coordinating Minister for the Economy, Minister of Trade, and Head of Indonesian Investment Coordinating Board delivering a press statement after a Limited Meeting at the Presidential Office, Jakarta, (12/1)

The Government has decided to revise the Negative Investment List (DNI) which contains more than 700 commodities, as written in Presidential Regulation Number 39 of 2014, that was initially prepared to face ASEAN Economic Community (MEA).

Since now the MEA has began, several revisions must be done so that investment in Indonesia is more attractive and easier for investors as well as to provide them certainty, Cabinet Secretary, Pramono Anung, said in his statement after Limited Meeting discussing the DNI, at the Presidential Office, Jakarta, on Tuesday (12/1) afternoon.

Therefore, he added, President Joko Widodo assigned Coordinating Minister for the Economy, Head of Indonesian Investment Coordinating Board, and Minister of Trade to analyze and carry out the revision.

Pramono Anung mentioned that there are 16 ministries/institutions involved.Hopefully, in the next two weeks, half of therevision can be finished.  After it is completed, the Presidential Regulation will be revised.

A lot of Commodities

Meanwhile, Coordinating Minister for the Economy Darmin Nasution said that there are a lot of commodities that are included in the DNI. Based on the Law, there are seven sectors that are prohibited, not only for Foreign Capital Investment (PMA), but also, in some cases, for capital investment, for example explosive substance.

These seven sectors will not be changed. What we do is to make a change so that there will be more opportunities to invest. In economy, it is called open with conditions, Darmin said while mentioning the conditions are, among others, must have partner, must have special recommendations, foreign capital is only 30%, etc.

According to Darmin, the President said this is principally to protect micro, small, and medium enterprises (UMKM). Thus, there are several sectors that will be maintained for them.

The principles are, Darmin said, first: the Law must be respected; second: protection to UMKM will be strengthened.

With these principles, the President instructed to immediately revise our negative investment list and half of it is expected to be finished within two weeks, Darmin said. He also said that there are 751 commodities that are regulated in the DNI. Thus, it can not be finished at once.

We will start the work and hopefully it can be a good image for our business world and also the world business, Darmin said while mentioning that BKPM will be at the front line because the DNI is a regulation in investment sector. (GUN/SLN/OJI/ES) (MMB/YM/Naster)