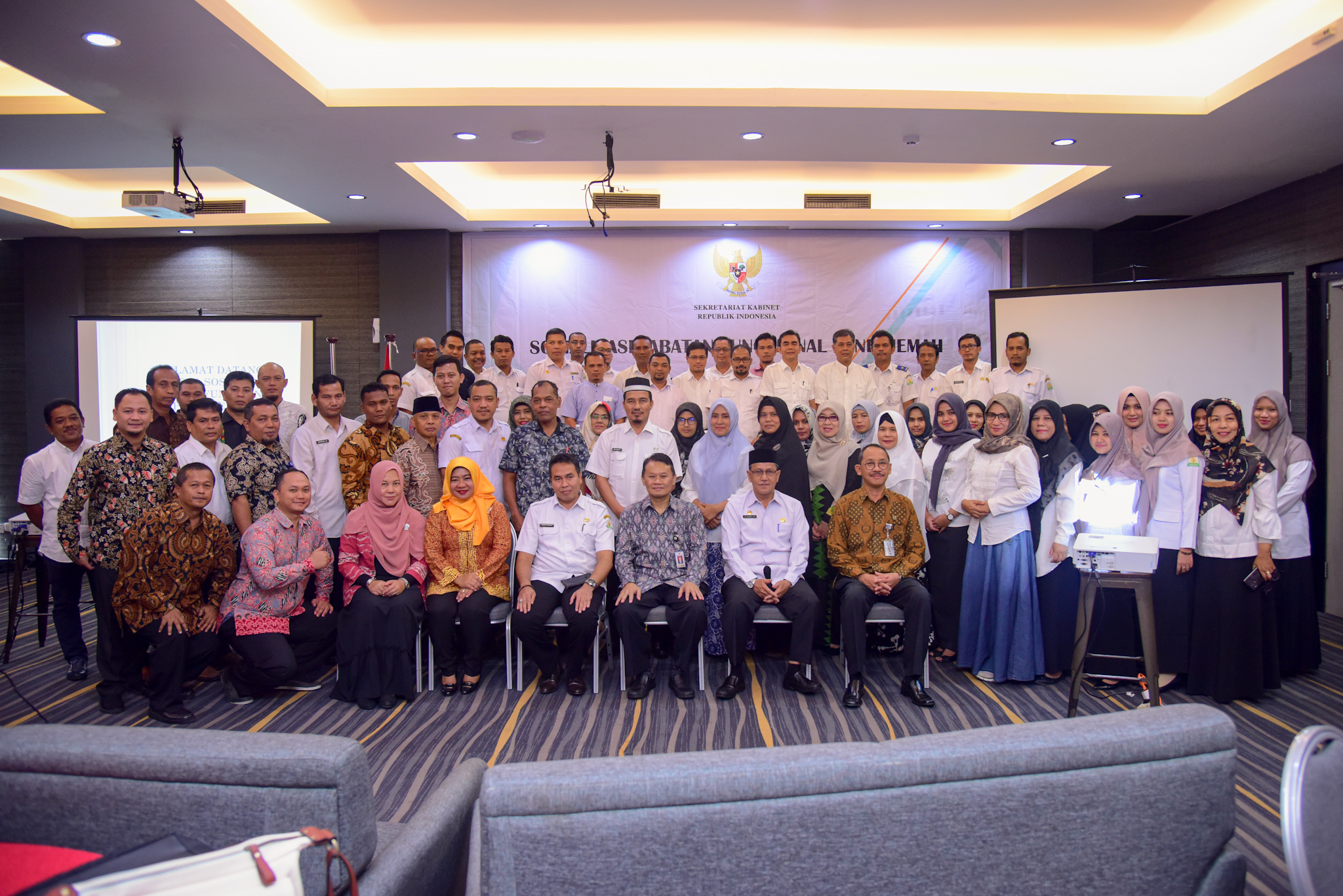 Participants of Dissemination on Functional Position of Translators (JFP) pose for a group photo with Assistant to the Deputy Cabinet Secretary for State Documents and Translation Eko Harnowo at Kyriad Muraya Hotel, Banda Aceh, Aceh Province, on Wednesday (9/10). (Photo by: Agung/PR)

Translators can contribute to national development and cultural preservation in the future, according to Eko Harnowo, Cabinet Secretariat’s Assistant to the Deputy Cabinet Secretary for State Documents and Translation.

“Translation is also a complex process that involves cultural factors,” Eko said during a dissemination on the role of government translators and interpreters, known as Functional Position of Translators (JFP) – in Banda Aceh, the capital of Aceh Province on Wednesday (9/10).

He added that Aceh province was selected for the dissemination this time due to the important role it plays and its contributions to the Indonesian independence.

“We hope Aceh provincial government can give opportunities to those (willing to be translators) though ‘inpassing’ (transfer) scheme by 2021,” he said.

As the fostering institution for JFP, Eko said that Cabinet Secretariat’s Assistant to the Deputy Cabinet Secretary for State Documents and Translation will continue to hold technical guidance, both at home and abroad to improve the quality and capacity of government translators and interpreters assigned in 57 central and regional government institutions in 26 provinces across the archipelago.

“To provide ample experience in translation to those translators and interpreters, we will provide them with opportunities to participate in international events such as Bali Democratic Forum (BDF), ASEAN Leaders Meeting, and other events,” he said.

Eko went on to say that translation should be done by trained or experienced translators. “State documents must be translated by government officials not by other party or outsource workers,” he added.

He added that those government translators can play an active role in supporting the regional government by translating regional regulations, agreement and cooperation, the official website of regional government, as well as in becoming interpreter for regional leaders during meetings with foreign delegates.

In the meantime, Assistant to the Aceh Governor for Public Administration Bukhori said that government translators and interpreters are in high demand to translate Aceh special regional regulation or qanun.

“Aceh Province has been working with academicians from universities to translate prevailing documents and regulations,” he said.

In the age of information technology, he added, competency of government translators and interpreters must be enhanced so they can compete with professionals from other countries.

During the dissemination, a representative of the National Civil Service Agency (BKN) also explained the participants that all state civil apparatus, including those government translators and interpreters, are obliged to make Employee Performance Target (SKP) based on their own assigned duties, tasks and activities.