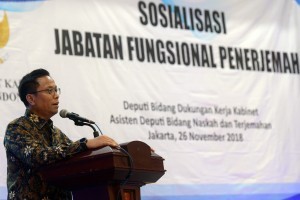 Yuli said that the Government currently has 172 government translators and interpreters in 55 institutions in central government and regional governments.

Yuli went on to say that Cabinet Secretariat is committed to developing competence of government translators and interpreters through various trainings at home and abroad, including several trainings in Indonesia with a total of 400 participants: two trainings for first-level translators, two technical trainings and seven technical guidance training.

Cabinet Secretariat has also collaborated with the Australian government to conduct training for 12 government translators at Monash University in Melbourne, Australia in 2017, he added.

Yuli went on to say that government translators and interpreters play a strategic role as a bridge of communication between the Indonesian people and the people of friendly countries, in developing Bahasa Indonesia and preserving regional languages, and in supporting the Governments programs, including 10 priority tourism destinations in several regions in Indonesia.

The event was attended by representatives of several government ministries and institutions. The keynote speakers of the event were Aba Subagja from Ministry of States Apparatus Empowerment and Bureaucratic Reforms and Herman from the National Civil Service Agency (BKN) while Assistant to Deputy Cabinet Secretary for State Documents and Translation Eko Harnowo acted as the moderator.