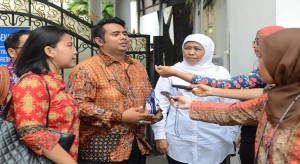 “The possibility of format is a garment factory, to be able to open up job opportunities for deaf people. So the format is starting from the management team to the technical team that will be manned by the deaf,” Minister of Social Affairs Khofifah Indar Parawansa said after accompanying the Central Executive Board Post of Deaf People’s Struggle (Pospera) Indonesia meet the President at the State Palace, Jakarta, Tuesday (23/6).

Minister of Social Affairs Khofifah added that the plan to build a factory that all employees with disabilities that will serve as a pilot. If successful, in 1-2 years will be developed in other areas, especially in the area of eastern Indonesia.

To realize the plan, the government will hold a British management team has conducted similar programs in seven countries.

“In Indonesia, they’ve got a pilot project in Tangerang and Cilacap. It would be a fresh breeze for the process of synergy, between the proposed of deaf, the President’s commitment and plans of the Management Team of the UK, “he added.

The construction of the pilot plant is expected to absorb 4,000 people, but at an earlier stage might be only 500 deaf people.

Job creation will absorb disable population in Indonesia, whose numbers reached 6.06 million in 2012.

“The President conveyed to cover at least 4,000 workers, but was delivered earlier for the pilot project only 500. Following this, their representatives will be directly to the Ministry of Social Affairs office,” Novita said. (SLN/ES).