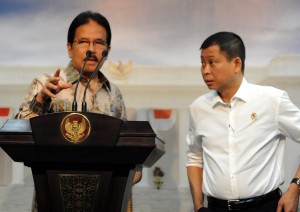 CME, Sofyan Djalil accompanied by MoT, Ignatius Jonan in a press statement, at the Presidential Office, of Jakarta, Monday (13/7)

In order to get the best option to realize the construction of Jakarta-Bandung high-speed rail (fast train), the government will hold a beauty contest against the parties who have expressed the interest.

Coordinating Minister for Economy (CME), Sofyan Djalil said, so far there are already two parties, two countries that are interested and have done a comprehensive study, namely Japan by the Shinkansen, and China with their fast train.

“The conclusion is we will make a beauty contest, so who is the best will win, and the government will give the award to the winner of this beauty contest,” said Sofyan told reporters after attending a limited cabinet meeting regarding transportation, in the office of the President.

Therefore, Sofyan said the government would be hiring a consultant from a third country that has no conflicts of interest to be a kind of referee in that beauty contests. “Soon to be appointed parties will become supervisor or the executive of beauty contest,” he said.

The Consultant Will Assign

Minister of Transportation (MoT), Ignatius Jonan who accompanied the Coordinating Minister for Economy Sofyan Djalil added, although at this time who conveyed the interest in the development of Jakarta-Bandung fast train of came from two countries, but if there are other parties that interested again later, the government still provides an opportunity them.

“We will determine the schedule for the beauty contest, and so on,” said Jonan.

Minister of Transportation asserted, in the construction of fast trains the government would determine 1. Trace that will be passed and 2. End-to-end point, from one places to another.

“This is going to be made the TOR, may be the chairman or coordinator Coordinating Minister for the selection of consultants. However, that determines later on is not government, but independent consultant who considered reliable to determine who is the best for the condition or required by Indonesia, “said Jonan. (GUN/RAH/ES)