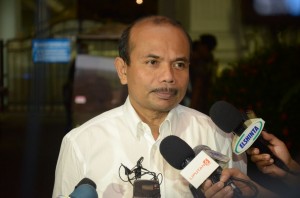 Plenary Session of the Cabinet led by the President of Joko Widodo (Jokowi) and attended by Vice President Jusuf Kalla, at the State Palace, Jakarta, Monday (13/4) night, ending at around 21:30 pm.

Minister of National Development Planning (PPN)/Head of Bappenas Andrinov Chaniago argued, that the plenary session to discuss the temporary draft of Government Work Plan (RKP) for 2016.

“So, how do we see or describe the annual priorities for the year 2016, and also made a temporary draft budget allocation with the Minister of Finance, that had been submitted. After that, listening to the input of the President and Vice President. Messages and guidance from him, what should not be forgotten and what needs to be added,” Andrinov said.

What is the direction of the President? “Concretely, the program should also reflect the priorities pro-people and pro-change, that the characteristics of the program,” Andrinov said.

As for priorities, according Andrinof, the government followed the National Medium Term Development Plan (RPJMN). There are priority sectors in RPJMN that for the food sector, especially food sovereignty, for the maritime and marine, and the third for the energy, then for the industry and tourism.

Then there are regional priorities, “That was underlined again by the President, how to speed up development in the border areas, suburbs and rural areas as well,” Andrinov said.

“We still have the resources in the sea and land, well now how we use it better, that was delivered,” said Andrinov.

For this reason, continued Adrinov, formulate the program how to utilize these resources in order to really be able to make Indonesia a sovereign, independent in economics, and also really for the build community.

If the budget, according Andrinov, the President’s message is do not use the method routinely add but look based on priority needs. “So do not look at how much last year, and now plus 5 percent, 10 percent, do not use that system,” the President said.

Andrinof estimates that the RKP 2016 will be finished by the end of April, finished up Musrenbangnas stage, until next May.

Are any criticism from the President related to the work that carried out by the Ministry? “The meeting is not a cabinet meeting for evaluate but for describe the temporary design of the Government Work Plan for the year 2016, and then look at the ability of our economy, saw economic growth, forecast the state revenues. Then based on that, how are we going to finance the programs that are already prepared,” Andrinov said. (Humas Setkab/ES)