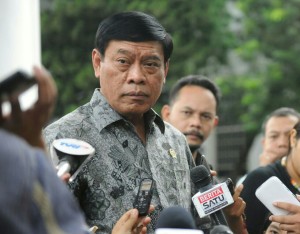 Government would soon sinking three foreign ships of culprits of illegal fishing in Natuna waters, the Matak island to be precisely, Anambas regency in Riau islands.

The execution of these Vietnamese ships would be carried out on President Joko Widodo (Jokowi) instruction. The message is do not do illegal fishing in Indonesian teritory, said Coordinating Minister (Menko) of POLHUKAM Tedjo Edy Purdijanto after met the President Jokowi at Presidents office, Thursday (4/12). Menko POLHUKAM adds It is government firm action.

According to Tedjo Edy, the government set 67 ships to a stand by state, 24 of them are ready to be mobilized to safe guard the Nusantara territory. Those fleets consists of ships from The Ministry of Maritime and Fishery, Customs, State Police and Navy.

The supervisory would be conducted by State Board of Maritime Security (BAKAMLA) which is scheduled to be announced on the Nusantara Day, December 13th, said Tedjo. According to Tedjo Edy, Bakamla would take control the command during emergency situation on Indonesian waters.

Bakamla would be responsible for maintaining stability of Indonesian maritime and take firm action on foreign ships which do the illegal fishing in our territory. Tedjo also said that the sinking-action to those ships would be carried out based on procedures and rules.(WID/Humas Setkab/ES)(Ifp)