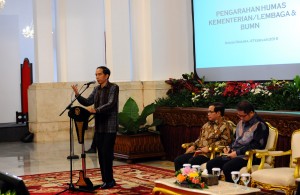 President Joko Widodo instructed public relations offices in ministries as well as in non ministerial institutions to be rapid in responding and giving information. Do not deflect information and I do not want to hear anymore that it is difficult for the people to meet Governments public relations while it should be use to find them (the people) to give information, the President said in a gathering with public relations of ministries and non ministerial institutions as well as State-Owned Enterprises at the State Palace, Jakarta, on Thursday, 4 February 2016.

Moreover, the President said that do not let the people have no information about the hard work of the Government as well as State-Owned Enterprises. How will they know? Inform them the things that have been done. Use new ways to disseminate the information and leave old patterns.

The President gave several examples of things that can be informed to the people. The interest rate of Peoples Business Credit (KUR), for example, reduces from 22-23 percent to 11-12 percent, even this year the number will be reduced to 9 percent. How the people know if no one inform them. The people needs KUR. Please tell them also how to get it, the President said.

Therefore, the President also asked the public relations in ministries/institutions as well as State-Owned Enterprises to move faster and be more sensitive in giving information to the people. Put aside sectoral ego. Prioritize togetherness and synergy. Do not just focus on the problems in ministries, the President said.

Moreover, the President reminded that now we are entering a competition era. It is a competition between countries. This he reminded the importance of the perception that is delivered by those public relations. What is the last goal of the perception of an image? It is the trust from the people and the world, he said. The President explained that positive perception of a country is needed to show that the country deserves to be tourism and investment destinations.

The President said that the respond when there was a bomb blast several weeks ago was very good example. The people are not affraid. All of us move, he stated.

At the end of the press statement delivered by Presidential Communication Team, Ari Dwipayana, President Joko Widodo gave a message that this joint effort is really needed. The President also explained that the main purpose of the terrorist is to create terror. But the people and the country stated that they are not affraid. The respond was almost at the same time. It got appreciation from inside and outside the country, in particular the fast response of the Indonesian Nasional Defense Forces (TNI), the Indonesian National Police (Polri), as well as the people, the President said. (TKP/EN)(MMB/YM/Naster)