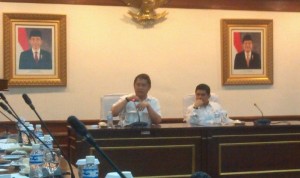 Minister of Communication and Informatics Rudiantara reminded the obligations of Government Public Relations to disseminate policy, including First Phase Economic Policy Package in September 2015, that has been launched by President Joko Widodo on 9 September 2015.

In regards to the dissemination of the policy, the Minister expected that Government Public Relations has duties to respond joint policies and to study them.

Therefore, single narration related to policy deregulation in every economic package at ministries/institutions level, Rudiantara said in Thematic Forum of Bakohumas that was organized at the office of the Ministry of State Apparatus Empowerment and Bureaucratic Reform (PAN-RB), in Jakarta, on Tuesday (15/9) morning.

The Minister said that this afternoon his office would announce the ministries that will get tasks relating with policy deregulation in First Phase Economic Policy Package in September 2015.

Meanwhile, the Minister of PAN-RB Yuddy Chrisnandi, said that the Government needs Public Relations to disseminate information and needs their strong commitment to uphold democracy.

Yuddy reminded that to publish every Governments achievements, Public Relations needs adequate knowledge and awares about macro issues. Moreover, Yuddy asked Government Public Relations to disseminate information that enlights the community so that they are all aware about their support, role, and responsibilities.

The success of Public Relations performance can be measured from the growing support to the Governments policies in various sectors and declining amount of the parties that counter the policies. Thus, every problem can be solved because people understand that the Government solves the problem, Yuddy said.

The Thematic Forum of Bakohumas was organized by the Ministry of PAN-RB featuring a theme Public Relations Role in the Synergy of the Campaign of Mental Revolution of State Civil Apparatus and Bureaucratic Reform.

Beside attended by Minister of Communication and Informatics Rudiantara and Minister of PAN-RB Yuddy Chrisnandi, the event was also attended by echelon one officials and employees working at Public Relations unit of all Ministries and Institutions. (MMB/YM/Naster)